Highlight: In Vietnam cock fighting is a traditional sport. For many centuries, Hanoians have been interested in cockfighting because of the cocks’ fighting skills, the game’s tactics, and its sporting spirit.

For many centuries, Hanoians have been interested in cockfighting because of the cocks’ fighting skills, the game’s tactics, and its sporting spirit. The hobby has helped to create the cultural identity of the capital city’s citizens. Let’s visit Dong Anh District to explore this traditional sport and find out how it is being preserved there.

Cockfights are often staged during traditional festivals and they’re not unusual in Dong Anh. Whenever a village festival is held there, all local fighting cock owners – old and young – gather in the big yard in front of the communal house for a competition. A cockpit is set up – a 2-meter ring walled by a 20cm-high bamboo screen. 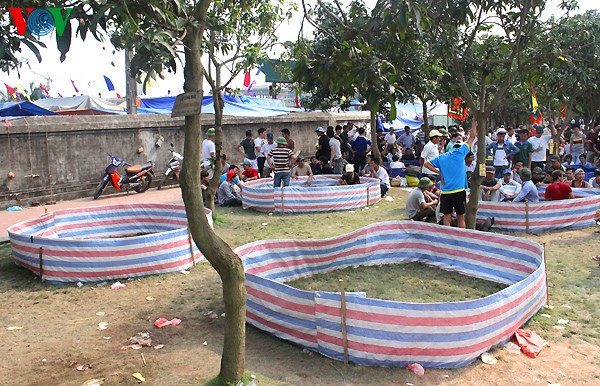 Before a cockfight begins, the owners agree on the terms among themselves. They compare the size, weight and fight records of their roosters. If one rooster has longer spurs, its rival is allowed to wear artificial spurs. After the discussion and agreement, the owners bring their birds into the ring. The cocks are kept in two separate halves of the ring until a signal is given to start the fight. Cocks usually attempt some trial feints to gauge their competitor’s reactions before giving mortal thrashings: a double kick against the rival’s body, a cut to the neck using spurs, or pecking out the rival’s eye. 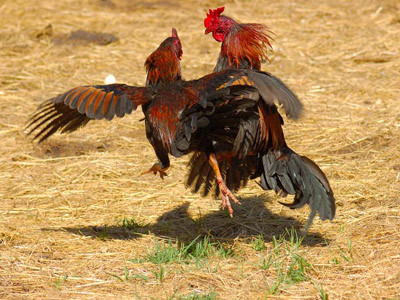 Each round takes place for about 15 minutes, then break is in 5 minutes

After the owners agree on the terms among themselves, the competition begins

The fight continues until one bird is defeated. Contestants time the rounds by burning an incense slick or draining water can with a hole in it.

Vietnamese cockfights have two forms of compensation. In one version, the loser pays an agreed-upon sum lo the winner; in the other, the loser forfeits both money and the defeated bird.