Huu Tiep Lake and the Downed B-52

In the residential Ba Dinh district of Hanoi lies a sobering reminder of the human cost of the Vietnam War – wreckage of a B-52 bomber shot down shortly before the war ended.

Operation Linebacker II, known internationally as the Christmas Bombing, was a bombing campaign of three thousand sorties carried out by American forces between December 18th and 29th, 1972. Intended to compel North Vietnamese leaders to sign a provisional peace agreement, Linebacker II targeted military installations in the heavily populated area between Hanoi and Haiphong. Despite the intended targets and the evacuation of nearly half a million civilians from those cities, 1,318 civilians were killed in the bombing, arousing international condemnation. In retaliation, North Vietnamese forces launched more than 1,200 missiles and shot down fifteen B-52 bombers, capturing 31 crewmen and killing many more.

An artifact from this last paroxysm of violence in the American portion of the war remains out in the open in the quiet neighborhood of Ngoc Ha. Tires bleached bone-white by the green waters of Huu Tiep Lake, the rear landing gear and undercarriage of an American B-52 bomber rests where it fell after being shot down on December 27th, 1972. A nearby plaque describes the event in typically florid language: “The Battalion No72 – Air Defence Missile Regiment No285 shot down on the spot a B52G of the US imperialist violating Ha Noi airspace … creating an important change that led the Vietnamese people’s anti-US resistance for national salvation to the complete victory.” The well-kept houses reflected in the waters surrounding the twisted remnants offer a sharp contrast between modern Hanoi and the horrors still in living memory of its inhabitants. 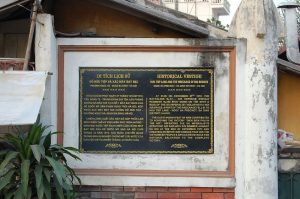 While American forces had been bombing the North Vietnamese for eight years, it was thought that the Christmas Bombing would force them to sue for a peace more acceptable to the U.S. and South Vietnam. The peace terms signed in January of 1973 differed only slightly from the terms proposed by North Vietnam before the bombing. 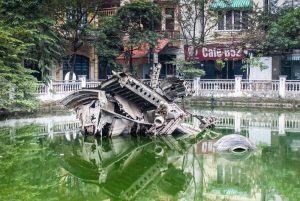 Know Before You Go

Huu Tiep Lake is a twenty-minute walk west of the Ho Chi Minh Mausoleum in the Ba Dinh district, just west of Hanoi’s Old Quarter. If you walk west on Hoang Hoa Tham Avenue where it meets Ngoc Ha Avenue, you should see a sign directing you to the memorial down a narrow street.

To enjoy more beautiful sightseeings in Vietnam by your eyes, you can see some itineraries below Halong Bay Cruises – Hanoi Tours – Vietnam Tours – Sapa Tours – Package Tours – or book a private car to discover where ever you want to enjoy the Vietnamese taste.