Phong Nha Cave was first “discovered” in 1899 and has had many purposes since then. During the American war the cave was used as a hospital to store and hide equipment and as a hospital. The Phong Nha cave is not the only cave in the area that was used for military purposes. Many other caves were used as hide-outs, weapons arsenals and bomb shelters!
In 1992 a group of British scientist joined the Hanoi University on a expedition inside the cave. With the mission to fully explore the cave and document it. Between the 18th of march and the 18th of April several expedition were organized and the group had successfully discovered 7,729 meters of cave with a maximum height of 50 meters and a maximum depth of 83 meters. This expedition and documentation was the reason for opening it up for tourism in 1995.
Not long after the opening of the Phong Nha Cave to the public a artificial lighting system was installed in 1998. However, in 2012 the current president of the company changed the lighting which helped reduce the damage to the cave and create incredibly beautiful ambiance.

The Phong Nha cave is the longest wet cave or river cave in the world. The extremely large subterranean river system is running through the entire cave, however, there are some large dry chambers in the cave which the water doesn’t reach anymore.  The cave is divided in to three different sections, each section is home to different animal species and there is a big difference in temperature.

The mouth of the cave and the first couple of meters inside the cave are described as the entrance zone and are home to all animals that live in sunlight. In hot days these animals will search for shelter inside the cave. Every animal that’s living inside the National Park could do so: Birds, monkeys, fish, insects and much more.
The only way to enter the cave is by a short 30 minute boat ride boat on the Son river. Every tour to Phong Nha Cave starts at the boat station at the Phong Nha Ke-Bang Tourism Center. The mouth of the cave is simply beautiful and unlike any other cave entrance in the world. 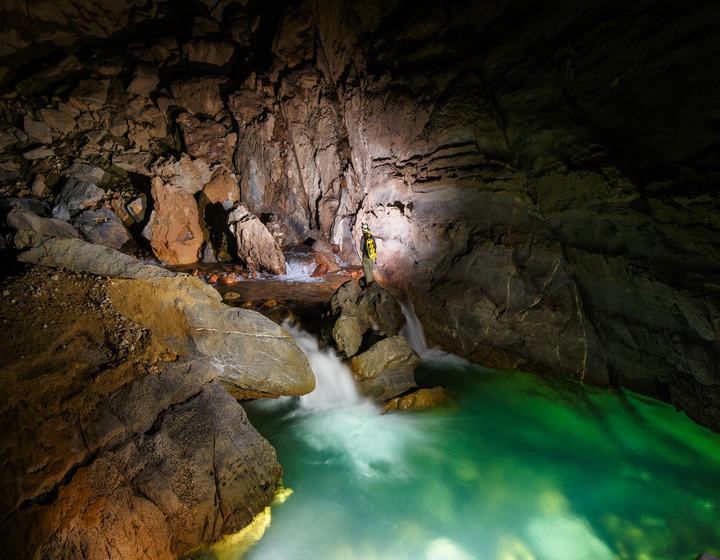 This is the zone in which the artificial lighting system is installed, The Twilight Zone. The lighting system lights up the entire cave and focuses on the most magnificent stalagmite and stalactite formation. This creates a very breath taking and unique sight, it enhances the cave’s beauty and the entire cave exploration experience. There are not many animals living inside this zone as there are many visitors who enter the cave every day. The animals that still live in this zone can mainly be found inside the water such as: Crabs, shrimps, eel and other kinds of fish.

After the last light installation which is located about 1.2 km from the entrance of the cave there is nothing but darkness. Here the cave can be experienced as its : Dark. For many visitors this is a very mysterious part of the cave that they will never get to see. However, for the more adventurous type there is a option to explore 4.5 kilometers of the cave which means that they’ll venture in to the darkness guided by our professional tour guides. For more information about this tour please click here.
The deeper inside the Dark Zone the stranger the animals get, there are many blind animal inside the cave: blind fish, blind bats and blind insects (crickets, spiders). These have long antennas to be able to survive and navigate their way through the darkness. Sometimes red lizards can be found inside the Dark Zone but they’re quite hard to find!

It’s not a taboo, visitors of the Phong Nha Cave are damaging it in many ways. However, the Phong Nha-Ke Bang Tourism Center and the government are doing a very good job in preserving the area and the Phong Nha Cave. There is a limited number of people that are allowed inside the cave everyday, luckily this number rarely gets exceeded.
There are several ways tourists are damaging the cave, the first reason is that most tourist touch the big stalagmite and stalactite formation. You might think this is no real reason but it is. When a person touches one of the formations oil from their skin will stick to it and from that point on water that drips down on the formation will run past this point instead of stick to it. You can imagine that hundreds of people touching the inside of the cave every year will have a significant impact.
The second reason is the change in the amount of carbon dioxide in the air. The more people inside the cave the more the balance changes. This will eventually affect the overall temperature inside the cave which can be very harmful. However, the temperature inside the cave has remained very stable since it’s been opened to the public!

In the late 19th century, Leopold Michel Cadiere -a French missionary- conducted an exploration of the first 600m of Phong Nha cave where he discovered some ancient inscriptions on the cave wall and remains of an altar which belong to the Cham people. The Cham people have been living in this area thousands of years ago, and remains of their ancient culture can be found all over Vietnam (e.g. Myson Village). This ancient civilization had their own script which is not fully decrypted until the day of today and it will probably remain a secret for many more years.

Another great aspect about the Phong Nha cave is the many fossils that can be found embedded inside the large limestone rock walls. The fossils are all marine creatures such as fish, seashells, crabs and perhaps many more. In fact, the entire ground of in the Phong Nha-Ke Bang National Park is filled with fossils that will probably see the daylight after a couple of hundred thousands of years.

There are several tour options that include a visit to the Phong Nha cave, our most spectacular tour is the 4.5 km exploration of Phong Nha Cave which takes visitors deep inside the cave.