As part of the VND1.1 trillion project, Ha Long International Cruise Port, the inland waterway wharf – marina is located to the left of the Hon Gai – Cai Lan channel in Bai Chay Ward, Ha Long City. It will be used as a mooring for cruise ships, speedboats and yachts to visit the heritage bay.

The pier is located in the centre of the Bai Chay tourist area, next to the Sun World Halong Complex – an entertainment and recreation cluster. It takes only five minutes to go from the marina to Ha Long market and Quang Ninh museum. In addition to Vietnamese tourists, foreign arrivals by luxury cruisers will be easier to move to domestic ships to explore Ha Long Bay.

Especially visitors will have an unparalleled experience as they contemplate beautiful architecture, and enjoy attractive food and shopping at the port’s terminal while waiting for tickets to Ha Long Bay.

Covering an area of 13,500 square metres, the terminal can accommodate up to 2,000 people and consists of comfortable lounges and duty-free shops providing high-end products such as wine, souvenir and cosmetics. In addition, there are supermarkets, restaurants and shops selling local specialties.

Designed by Bill Bensley, who is among the top five leading architects in the world, the terminal is a sophisticated blend of Vietnamese and European culture and architectural design.

Earlier on December 30, 2018, an international port under the Ha Long International Cruise Port was officially put into operation. So far, it has welcomed nearly 56,000 visitors from almost 40 large-scale ships, including Celebrity Millennium, World Dream, Mein Chiff, Westerdam, and Voyager of the Sea.

Thiên Huế, Hội An, and Đà Nẵng are three main tourist attractions in the Central of Vietnam. With the convenient locations for transition to these places, Chan May seaport annually succeeded on welcoming thousands of tourists from over the world. Especially, Diamon Princess, the international ship from USA brought more than 2,700 visitors, mostly from US, Canada, UK and around 1,200 crews to Chan May port. To exploit the potential of Chan May port, being considered as the most safety, friendliness and quality port for tourists, Hue will continue to invest in and implement service activities to meet the requirement of tourists. At the same time, the promotion of tourism and cruise tourism activities at domestic and international tourism will bring a lot of benefits for tourists coming here.

Receiving 34,000 tourists to Chan May port, this place is one of 46 seaports selected by the Asian Yachting Association to build a stopover for yachts in Southeast Asia. It is the main port between the sea lanes connecting Singapore, the Philippines and Hong Kong. In addition, Chan May port is located in the center of Vietnam, between the two largest urban centers in central Vietnam (Hue – Da Nang), the national key tourist area (Canh Duong – Lang Co – Hai Van, National Park). On the other hand, Chan May port is the nearest gateway to the East Sea and the most convenient for transportation connecting the Central Vietnam with Laos, Northeast Thailand, and Myanmar. Especially, at present, Chan May port has a pier of 420m in length and 12.5m in depth, being capable of receiving ships of 30,000 DWT and large international cruise ships of 3,000 passengers. 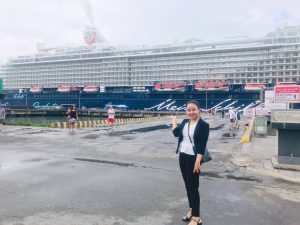 Tien Sa port in Da Nang city, one of the most important ports in the Central Vietnam with an extremely favorable location is the largest deep-water seaport in central Vietnam. In 2007, the port handled a total of 2.7 million tons of cargo and thousands of critical tourism crews visiting Vietnam. The post is always the number one selection for tourists because of its strategic position, the important traffic hub of the East-West Economic Corridor in Vietnam, having a road system linking smoothly between the port with Da Nang International Airport and Railway Station, taking 1km from National Highway 1A and near the international maritime route.
Tien Sa port, Da Nang is the most selective destination by many international vessels not only for its modern infrastructure but also its convenient departures to ranges of Vietnamese landscapes in the Central Vietnam. Tien Sa port with charming landscape has long become one of the attractive tourist destination for tourists. Coming here, tourists can participate in exciting recreational activities in the Tien Sa eco-tourism area. Located 10 km north-east of Da Nang city, Tien Sa eco-tourism area is not only a great resort destination, but also a tourist attraction of Da Nang that is especially attractive to visitors by its beautiful surroundings’ nature.

Like other reputable port in Vietnam, Tien Sa port also welcomes thousands of international tourists visiting Vietnam annually, especially in festival seasons. The famous Taisan cruise from China with 900 tourists from this country entered Vietnam in Tien Sa port, or Genting Dream, SS Virgo convey a large volume of European, UK, US, and other west countries to visit Da Nang. Impressively, in 2016, the port welcomed 58 cruise ships with 81,271 visitors, up 3.6 times compared to 2015 (47 cruises with 22,314 passengers). Especially, recently, on March 5, 2018, US Naval Vessels including US Carl Vinson, US Lake Champlain and US Wayne E. Meyer arrived at Tien Sa Port, Da Nang from 5-9 / 3/2018. This is the first visit of a US carrier to Vietnam, promising the large potential relationship development of Vietnamese tourism with US and EU as well. 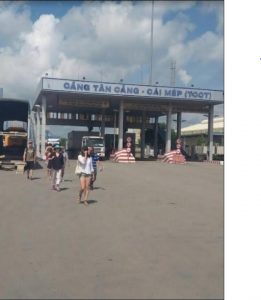 Toursit arrive Phu My Port and would like to rent a car please get to our taxi meeting point in Phu My port at picture above. You can walk from the cruise to the Meeting point at Exit gate, it take about 5 minute walking with distance of 500 meter.

As one of the most active port in Vung Tau, Phu My port also displays an important role in the transportation in Vietnam with area of 385m x 27m, its cruise capability is 70.000 DWT, promising to welcome thousands of tourists visiting Vietnam per day. With the 1,340 employees, Majestic Princess has brought 3,560 international guests on board to visit Ho Chi Minh City (Ba Ria-Vung Tau) at Phu My port. The 330,000-ton and 143,000-tonne Majestic Princess, operated by Princess Cruises, departs its first international voyage in Italy from Singapore to Shanghai with stops at Bangkok, Ba Ria-Vung Tau, Xiamen, Hong Kong, Taipei, Yokohama, Osaka, Incheon and finally Shanghai (China), Phu My is the second destination after Laem Chabang (Bangkok, Thailand). Otherwise, Princess, Princess Sapphire, Diamond Princess, Golden Princess, Sun Princess and Princess Coral cruises will make 35 voyages to Vietnam with about 79,000 passengers at Phu My port, Vung Tau.
From Phu My port to the center of Ho Chi Minh city, tourists have to take about 70km for a half and one hour. Tourists can choose the most convenient movements from the port to the center by car. Phu My port is planned to meet the requirements of welcoming the world-class ships in upcoming time thanks to its international standard infrastructure and equipment along with professional services to receive and welcome thousands of tourists annually. Specifically, some significant events of Phy My port expected in 2019 are at the port of the Diamond Princess ship caring tourists from many countries, including the United States, Britain, Canada, Australia, Germany with the most professional services. Otherwise, to impress international tourists as soon as Phu My has stepped up the reform of administrative procedures on the border.